Garagiste Against the Machine 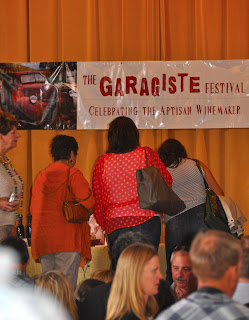 Good timing is often simply good luck, and that's certainly the case with my arrival in Santa Barbara. 1994 was pretty much the dawn of the success of the county's wine industry, so I've had the opportunity to taste and learn, over and over. In those nearly 20 years pioneers have gone bankrupt--twice--while still making terrific vino, a Hollywood film put Pinot on the map, a new AVA got carved out every few years or so, exes and partners have stood equal or more (let's not quibble) with their spouses/exes/"pals" as winemakers, people figured out where to grow Bordeaux varietals (remember the green pepper in every cab once upon a time?), and you can hit 17 wineries without even heading over the hill. Once the Wine Cask's Futures Program was the best way to keep your deeply red thumb on the vinous pulse of the county, but with that a mere memory (unless you have a really deep wine cellar), it was fascinating to attend The Garagiste Festival Southern Exposure: Celebrating the Artisan Winemakers of the Santa Ynez Valley tasting on February 16. There one got to sample the wine of 32 artisans (oh, ok, I hate that word too, but it did mean something once, and does here), who, despite sometimes having ties to larger, more established wineries, all are up to something new, and if nothing else, small. Ryan Cohchrane might win the precious prize, having made only 12 barrels of wine in 2012 (his wines all seem to have names that end "sold out"). 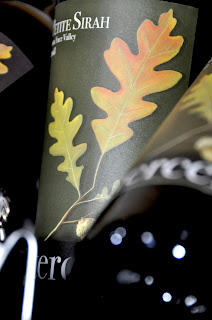 But selling out is far from a problem with this intriguing, intrepid group. I had to start my tasting at Larry Shaffer's Tercero Wines table, who, at this point, if he's a garagiste, has at least a three-car garage. As usual he offered an abundance of riches (starting with a vivid '09 Mourvedre) and then some, as he always seems to pour something off the list, too. (OK, I have to admit this was the media/trade tasting, so everyone was trying to double impress. And that works, you know.) One of his greatest projects is a Mourvedre Rose, its pale-pale color and odd funk on the nose (barnyard?) simply not preparing the palate for such a lovely wine that he wisely compared to a Tavel.

Indeed, a pleasant preponderance of pinks on what was a warm day made summer seem very near. In addition to Tercero's, Altman Winery offered a '10 Rose from Petit Syrah that packed a surprising amount of fruit while remaining dry, A-non-ah-mus poured a '12 Rose from Syrah barrel-sample that asked for a veranda with a view to be imbibed upon, and Kaena (another one of the slightly more established garagistes) poured a '12 Grenache Rose barrel-sample to prove many a grape can make a wonderful pink wine.

Well, there's a danger of a write-up like this one to become a mere list, plus when you're trying to taste upwards of 100 wines in two hours, it becomes a bit of a stunt more than a stroll--and since the winemakers themselves were pouring, it was easy to want to linger, discovering winemaker's goals, learning about growing seasons, finding out stories like how the Miller family bought J. Wilkes after Jeff's untimely death and are carrying on his tradition (very very well, it seems).

Ground Effect
Nick de Luca, who has worked at Star Lane/Dierberg among other places, is crafting delightful, sometimes unusual blends, like an '11 Gravity Check that includes Chenin Blanc, Albarino, and Pinot Gris, and he admits as it ages the wine seems to favor one or the other in its profile. There's also the '11 Rock Garden Syrah, Grenache, Zinfandel, a big red monster of berries and vanilla.

La Fenetre
Joshua Klapper aims for direct, elegant wines that could be alongside dictionary definitions of varietals, if you had a dictionary that you could lick to see what things were. OK, that might be a bit gross a description, but the wines--Chardonnay, Pinot Noir, Syrah--are anything but.

Shai Cellars
Shawn Shai Halahamy makes bold reds. His '09 Adome is 65% Syrah and 35% Cab and %100 luscious. It could turn PETA's executive board into carnivores, it calls for steak so. His '09 Grenache, as he puts it, "is incredibly savory and meaty, showing copious amounts of dried cherries and kirsch, smoked leather, dried beef, and ground pepper on the nose. This leads to a medium-bodied wine that has a supple, light texture, notable balance, and a long finish." Not only do I agree, I can barely read my notes from this point.

After all the talk in this entry about reds and pinks, it was necessary to include the photo below, with a bit of American flag. But at least our local wine country can wave its banner proudly, with wines like these. 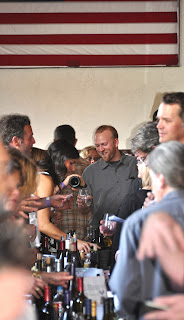 When you opt not to park in spots of a lot marked "Police Station Business Only" for a wine festival, it's advisable to pick a place within walking distance to eat-it-off, as it were. And since this fest ran from noon-2, it seemed a perfect time to walk into Solvang and get a delightful late lunch at Cecco. It certainly didn't hurt it was one of those Santa Barbara perfect spring days that just happen to spring in the middle of February--where else could one want to dine but al fresco in Cecco's charming courtyard? The Caesar salad is a straightforward presentation (Chef David Cecchini is a classicist at heart), all about the crisp romaine, crunchy but not gob-stopper croutons, Parmesan, and a dressing zippy with garlic and anchovy. Then came two wood-fired pizzas, the thin crusts variably charred--since they're cooked in a real wood oven--and the topings spare, but not to the point you need to hunt them down. The Pomodoro was especially lovely with its fire-roasted red and yellow tomatoes a-burst with flavor. Not that the Bianco, adrift in its "snow" of arugula, didn't offer  perfect flavor profile itself, with its salt and brine from artichoke hearts, its richness from daubs of ricotta, and then some red onion and garlic for those notes only the most strong of lilies deliver. A fine way to end the day--plenty left over for lunch the next day, too.
Posted by George at 8:00 AM