Project We Own It and a Fab Feast 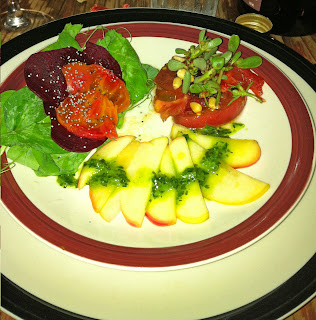 So amidst my self-pitying after the kick to the writerly nuts, I never got around to linking to this story as I should have, about the amazing thing the IV Food Co-op is trying to do--crowdsource a purchase of its building. It might end up being (probably) the first cooperatively purchased co-op in the country, something so wild and whacky other co-op vets tried to talk the IV Co-op out of doing it for fear they'd fail and embarrass the whole "industry." Now the IV Co-op is close to attaining its goal, and if you can give anything you should--it's history, it's the future, it's the only real food for 23,000 people in 1.8 square miles. So read more about it and donate at projectweownit.org.

And feel sad you missed the Farm-to-Table Benefit dinner for the Co-op last night, held at the very generous (and ever tasty on their own, too) Goodland Kitchen. This five-course feast was put together by Karla Subero, and had one of the warmest, coolest vibes possible, as you'd expect for an event all about people who love food and the people who sell them the good stuff. The donor list was a veritable farmers' market all-star parade, from Tom Shepherd (the IV Co-Op was the first commercial spot to sell his produce way back in the '70s, in fact) to Roots Farms. With all that good stuff, you just know the vegetable-driven menu would deeply please. After all, that's one reason we eat that kind of food--it does taste better as it's grown with more care and the grower might actually look you in the eyes someday. Sysco's got trucks, no eyes.

Perhaps the epitome of the evening was the the simply billed salad trio, artfully plated. Sweet slices of the last of summer's heirlooom tomatoes sat beneath a clutch of tart purslane and some toasted pine nuts. Roasted, thinly sliced baby beets sat atop peashoots, the heavy and light flavors melding well. And in a pleasing fan of the season's shifting, fall's apples were drizzled with the last of summer's pesto, a surprising perfect touch.

But it was an evening of surprises--chicken zipped with not just grapefruit marmalade but also pickled mustard seed, beet greens and kale subbing for spinach in ricotta dumplings--and no surprise at all, that the IV Food Co-op is community, and what could make more sense than supporting ourselves? Even better, you can have a damn fine time doing it, too.