Ode to Uni and More 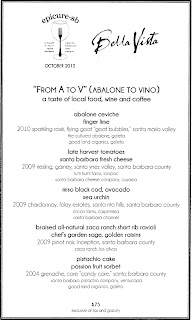 You almost have to assume the Japanese studied up their Latin before naming uni uni. For unique it is, a pungent terror to the timid, the essence of sea funk. If some chef devised a bone marrow and uni surf and turf, she might clear a restaurant in no time, offering too much mucilaginous elemental essence on one plate. So you've got to develop a taste for it, or simply like your taste buds slapped around a bit.

Or you could have it perfectly placed on a dish as it was in course three above. Draped over the miso black cod, the sea urchin turns into a hearty sauce, pushing the fish's flavors yet more forward, and black cod is no wallflower. It also, by contrast, makes the fish seem even firmer, as firm is the last thing uni ever is. That gets mimicked by the avocado appearing two ways, too, one simply sliced into artful arches, the other a loop of avocado mousse, you might say--it was too rich to be guacamole. And while it might seem from my description to be an intellectual exercise, these fine gradations of texture on a relatively simple plate, it was totally sensory as the palate got to parse smooth in a way Eskimos talk about snow.

To top the plate off, there's the element not listed on the menu, which made us think on any given night a "basic" dish might get a more market-friendly twist. We got to have a flash-fried squash blossom, delicious, and the dish's one bit of crunch, too.

Then again, Alessandro Cartumini at the Four Seasons Biltmore's Bella Vista always seems to make kitchen magic with nothing up his sleeve. These aren't tricks, but treats, from the way the finger lime made the salad pop in course one (although I have to admit the finely sliced approach--they looked like mushroom slivers--seemed to diminish the baby abalone) to the way the Inception Pinot Noir, a surprisingly lighter wine choice for short rib ravioli, brilliantly brought up all the dish's bright notes (golden raisins, indeed).

That's not mentioning the perfect salad, the late harvest tomatoes as bold as late harvest zin, practically, and then that dusting of crazy good Santa Barbara Cheese Company fresh cheese (the Carpinteria "squeaky" or the Santa Rosa queso fresco I'm not sure, alas), all cream and salt and fat. Or the dessert, which doesn't get described nearly as fully as the plate was full--that pistachio cake came in several slightly bigger than bite-sized chunks, amidst a sauce we still can't quite figure (just a-grade zabaglione?) but wish came in bottles and the freshest of raspberries, and then that passion fruit sorbet, exotic and comforting at once.

This epicure.sb thing  can sure highlight the best of SB, particularly when a Chef like Cartumini is in the kitchen.