Let Me Tell You a Story about a Junket Called Fess

Why yes, since you asked, it is good to be the Food Editor. People are often extra nice to you so you will write about them. Of course, I'd like to think I can't just be won over with a few kind words and a warm smile. Or even, as the case may be, lots of wonderful things all for free. So here's a rundown of a relatively recent excursion to Los Olivos that let us (my wife and I, no royal we implied) sample a whole bunch of stuff we probably wouldn't pay for ourselves, at least in a 24 hour period.

The thing is, stuff can be free and still be crap, or even mediocre, and that was far from the case here. We got to spend the night at the Fess Parker Wine Country Inn & Spa, which at 19 rooms is barely as big as its name is long. That's a good thing, of course, as its intimate but not after a buddy-buddy B&B thing, either. Everything just got a big update, too, so colors are rich and inviting, mattresses and linens are top notch, bathrooms are like mini-spas--it was too bad we didn't have a day or two alone to hang out in ours (showers with spray form the sides as well as the top are pretty cool, like a human carwash). You can get a sitting room 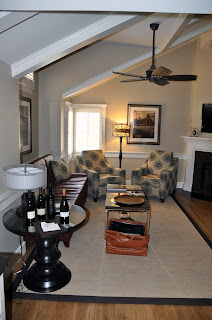 if you just need the extra space, or a place to enjoy the wines left for you to sample, and then your bedroom, too 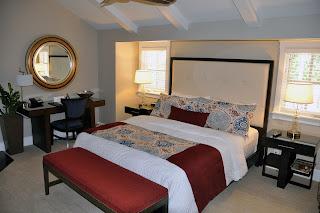 and if you're like us, you add it all up and it's almost as big as your house, especially since you don't have three dogs tromping about sharing the bed with you. Peaceful, pleasant, elegant. Very helpful folks at the desk, and not just with us, but with all the guests (got to overhear a lot of good interaction). There's also the great convenience of staying in "downtown" Los Olivos--so much wine and food just out your doorstep, with your car absolutely not needed, which is a good thing with so much wine just out your doorstep.

For instance, we had a lovely tasting at Presqu'ile led by the charming co-owner Amanda Murphy. If you want to know what some of the most interesting Burgundian varietals coming out of the Santa Maria Valley taste like, taste here. A true slap in the face to full-blown, that is over-blown, chards and pinots, this is food-friendly, acid-happy wine still packing plenty of fruit. The winemakers just know how to get out of the way and let the grapes sing. Oh, and not to get too tangential, but here's why wine writing is a scam; read this write-up of the Presqu'ile Sauvignon Blanc--"Palest gold in color, this wine smells of the classic combination of gooseberries and cat pee, with a good measure of cut green grass thrown in. In the mouth, the wine has a cracked glass tinkly acidity"--yum, piss, lawnmower droppings, and broken glass. You'd never guess that review ends, "Delicious." 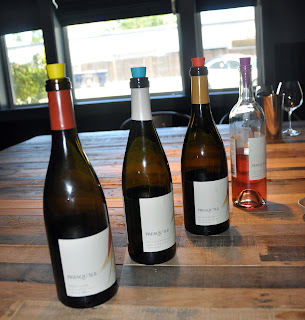 Speaking of delicious, we lunched at Sides Hardware and Shoes, and I've got a whole article with the very talented Nichols Brothers here. There's almost too much to like at Sides, even with its select menu--the vibe is comfy yet still with character, the help pleasant and skilled, the food delicious and often with just a bit of an edge (those cold summer soups served with a dollop of savory ice cream they were making I can still taste). Here's the Hammered Pig, which made me feel a bit like a G-d pig by the time I finished it--that's a heck of a lot of fried pork tenderloin. And speaking of fries, theirs are spectacular, served piping and just the right crisp on the out, creamy on the in. 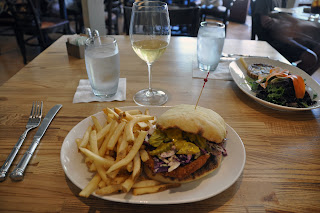 The photos end here because next up was a couples massage at the Fess Parker Spa, and after getting oiled up and rubbed down I could no longer hold a camera.They've re-done the spa, too, and there's now a pool to enjoy, not that we had the time, so busy having a good time. There's not much better than not having to do anything but feel someone's hands work the knots out of your body.

Before dinner we had another tasting, this time with Andrew Murray himself at Andrew Murray Vineyards. Talk about a man who can talk a great game--all engaging stories all the time. It's particularly fun to hear how he landed himself an internship in Australia before he really even knew anything about vineyards and winemaking, or Australia--discovering it is one big continent to fly across. Of course since then he's become one of our region's Rhone varietal-producing rock stars, and so then it's only more fitting one of his newer projects is E11even Wines, what they call "approachably priced, with an aim to over-deliver." It also gives him an opportunity to play with grapes he often doesn't, so if you can find the 2009 E11even Red blend, do so--an amazing mouthful of Cabernet Sauvignon, Cabernet Franc, Tempranillo, Sangiovese, and Grenache.

Dinner was at Petros, right in the Fess Parker Inn. I wrote about Petros for the Indy way back when it opened and it's still quite fine, starting with the bright, airy room--light wood, clean lines, it somehow suggests the Mediterranean while sitting in the mild, wild west that is Los Olivos. Upscale, definitely, and nothing like a stereotyped Greek spot, from its look to its menu to its ingredients-sourcing. There's always something a bit surprising on a dish, from the way the assorted dips don't shy away from garlic (if you're part of a couple, never eat this alone) to the almost intellectual cleverness of a surf and turf appetizer that matches up grilled octopus, wonderfully charred and not at all chewy, with beets. Not your usual turf representative, but they add a vibrant color to the plate and that iron zing you can taste. For assertive flavors, you can't beat Petros--I had a special of short rib over pasta that had such a deep, complex flavor I almost wanted to assume it was the Greek take on mole. The evening was made yet more enjoyable as we were joined by Kris Parker, COO of Fess Parker Enterprises. I have to admit I usually don't hang with such a heady crowd, but Kris had many a tale to tell about life as Fess's grandson and it was one of those nights were your mind gets expanded getting to discuss a bit of everything. The talk ranged wide from the glories of the Bruery to life on the road in a band, from the difficulties of managing a restaurant (Kris had managed Marcella, which previously occupied the Petros spot) to politics. It's always good to discuss, seriously, and with much humor, with someone who has had a very different experience than your own. Enjoying first the cocktail Glen’s Girlfriend--Glenlivet 12 year and Barenjäger honey liqueur shaken and served in a chilled martini glass with a lemon twist--and then Brewer-Clifton Pinot Noir along the way certainly didn't hurt, either.
Posted by George at 8:00 AM