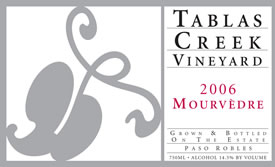 Not to say I'm ahead of the curve or anything, but today's Food Section of the LA Times includes a feech on Mourvedre whose hook is that Wine Spectator's 2010 Wine of the Year, the 2007 Saxum "James Berry Vineyard" red blend, is 31% Mourvèdre. The article gets to this graph:


Mourvèdre is also not a varietal for novice wine drinkers, which sets it apart from many Paso Robles reds. For many, the strength of the area is full-bodied, fruity red wines that are often fairly straightforward. Mourvedre is rarely any of those; it's a wine aficionado's wine coming from a region that — until the Wine Spectator announcement — was not known for them.
I always find it fishy, calling myself an aficionado, but I guess I have to if I want to be a Times reader. For Georgeeats has been Georgedrinksmourvedre (that makes me a GDM, I guess, and that resonates so many ways) as long as he's been heading north to Paso. Paso, especially west of the 101, is lovely country, period, and not just after a stop at a tasting room or two. But talk about your big and bold wine--Turley, Linne Calodo, Four Vines, Zin Alley, Denner, Villa Creek, Halter Ranch, Tablas Creek, Justin. Just thinking about it makes my tongue tinge purple.

I tend not to buy too many of any one wine, as variety is the spice of the cellar, and then there's those other sadder issues--there's only so much money, so much storage. But a good 4 years back I split a case of Tablas Creek's single varietal Mourvedre (was it the 2004 vintage?) and never regretted a drop. It didn't hurt Tablas often releases the wine in time for their delightful annual Pig Roast, and deeply grilled pork and the deep tannins of the wine match magnificently. But if you want bass (no, not the fish, silly) in your wine, as the article says, you can't beat Mourvedre. And Tablas and Villa Creek and Denner know how to make it (and the last two play with fruit from James Berry, too, so you can get close to the Saxum cache at a cheaper sticker price).
Posted by George at 8:01 AM